The Lincoln Library in Medicine Lodge began in 1898 with some concerned citizens and a gift of 500 books.

In February 1898, members of the Monday Afternoon Club organized a meeting in the old courthouse for selecting a committee to draw up a constitution and “perform other duties necessary to put the library in shape at once.”

To accommodate the five hundred books, a gift of Century Publishing Company, temporary library quarters were established in an upper room of the courthouse. Monday Afternoon Club women served as librarians, three hours each Saturday afternoon. Library quarters were later moved to a room in the opera house.

Fourteen years passed before a library building was possible. Fund-raising efforts included two Saturday benefits in 1911 at Pastime Theater (106 South Main, owned by Oscar T. Thom), and Lincoln’s Birthday sales at John C. Richardson’s clothing store, in 1910 and 1911. Richardson pledged ten percent of his gross receipts on those two occasions; bed sheets were selling for 79¢ and ladies’ shirt waists were on sale for 98¢ (regular $1.98).

Other individuals and clubs contributed and gifts of furniture and fixtures were made. Construction began August 1911 on a 30′ x 30′ building, located mid-way in the 200 block of North Main, on the east side, and was completed January 1912. Field and Tincher donated the lots, and Dr. Henry Wisner of Sharon became the largest single cash contributor by paying all remaining indebtedness — over $400. Dr. Wisner also gave the Wisner Memorial Fountain.

Medicine Lodge Lincoln Library opened January 31, 1912. Memberships were now one dollar. Actual cost was not recorded, but was described as more than one dollar per head, and the 1912 city population was 1,269.

Books were moved from the old building to the new, 201 N. Main (across the street and on the site of the opera house), in a “book brigade” of young and old. Gathering on a Sunday afternoon, volunteers formed a line from the old door to the new, and in less than two hours all books had been passed through the brigade.

In September 2001, the Tatera building just north of the library was purchased, though construction did not start until 2005. The Tatera building was renovated into a new children’s room and the outside was remodeled, combining the two buildings into one. After moving the children’s department to the new room, a new office was built where the children’s department had been and the old office was converted to a reading room. By January 2007, the main part of the library was ready for work. 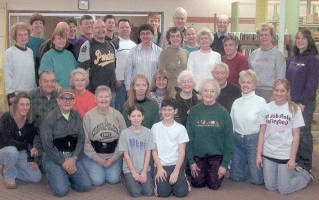 We were truly blessed by the number of volunteers that came to help move books off the old shelves Saturday, Jan. 13, 2007, even though the streets were icy. The books were carefully laid out in the new children’s room and the meeting room so the old shelves could be removed.

During the week, walls were painted, carpet was replaced, and brand new shelving was erected, laid out to take advantage of the additional space. On Saturday, Jan. 20, 2007, volunteers put the books on the new shelves, under the direction of the librarians. 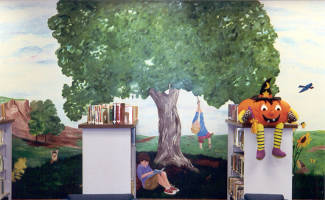 That fall, Connie Watts painted a beautiful mural on the north wall of the children’s room. It depicts Barber County and Kansas with the Gyp Hills, a cottonwood tree, a meadowlark, a black-footed ferret, and other state symbols. 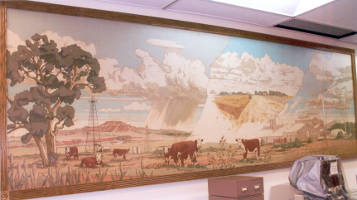 The Louise Bloom family loaned two old murals depicting Barber County to the library Jan. 2008. They once hung in the First National Bank. Restored by Caroline Norton, the murals now grace the north wall of the main room of the library.

The renovation finally complete, an open house was held Feb. 17, 2008.

Lincoln Library continually strives to meet the needs of the Medicine Lodge area community and others. Visit often to keep current on our changing services, programs and collections.

Story Time is every Tuesday morning at 10:00. We have started over on the alphabet and are doing Alphabet Animals. We read books, do games and crafts, and finish the time with a treat to take home. All preschoolers are invited to join us for a little social interaction and a good time!

Book Club will not meet this month.

Friend us on Goodreads.